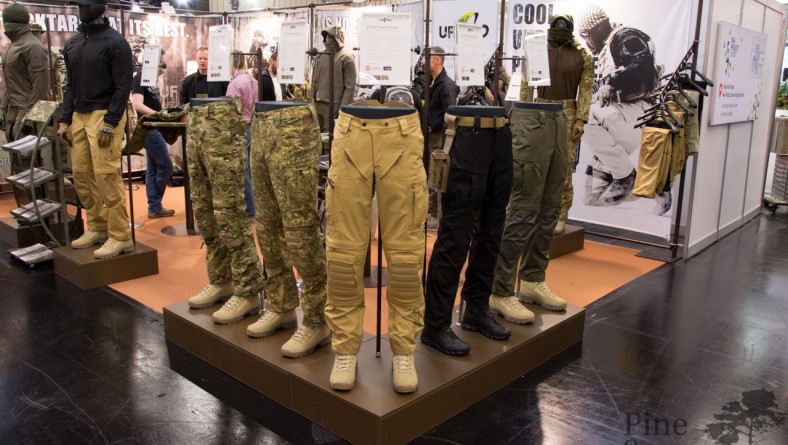 IWA is always exciting anew, especially when it comes to apparel. Europe is offering some fine brands, that in my humble opinion are among the top companies worldwide in terms of innovation and design.

Every year you will find something new at IWA. Be it new models, new materials or new approaches to new and old problems. I will try to give you some insights on what was worth looking at this year in Nuremberg.

Starting with UF PRO I was again amazed by the neverending drive for updating old models and creating new ones. The Design team introduced some new models like the P-40 All Terrain, the P-40 Tac 2 and the Striker HT.

UF PRO’s line up of pants

The P-40 AT is a hybrid design bringing together the features of the original P-40 pants and the Striker line up. A different pocket configuration and Cordura reinforced knee areas are the main changes worth noting. The P-40 Tac 2 is going to replace the older model of the P-40 Tactical.

The Striker HT features designated airflow channels which can be opened via zipper. Another example of how serious UF PRO takes the problem of heat regulation and cooling down the person.

The Striker XT pants have a different cut now on the back with Schoeller stretch fabric. Very interesting is the Multicam option of the pants which was combined with Slocam stretch material. Since there is no similar material in Multicam, UF PRO combined it this way and the results are amazing.

You might remember my argument for SloCam in terms of compatibility with Multicam – now here you have it!

The new Delta Ace Plus Softshell

Other new products consist of a new softshell jacket and the Striker XT Line up in german Flecktarn.

The Austrian company is especially known for their sleeping bags and cold weather gear. Like last year, Carinthia was showcasing interesting new products.

Besides the new generation of the Mig jacket, they also had a prototype for a hardshell jacket with G-Loft insulation. The feel of the material was quite unique and the overall design was quite promising.

For demonstration purposes only they also had a Mig Jacket on display featuring the british MTP camouflage pattern – it seems like the Royal Marines will get warm and cosy in the upcoming winter times. There was also an interesting overall/jump suit which was created for the Japanese Air Force.

The jumpsuit for the japanese Airforce

As always Carinthia knew to impress with their designs and materials. After all G-Loft is said to be performing better than Primaloft – something to keep in mind!

Another stop was at the booth of Leo Köhler. Most notably known for the bomb proof sewing, the company exhibited their take on modern combat pants incorporating stretch materials and new camouflage patterns.

Beside that the had their full line up of classic smocks, jackets and working apparel.

Another personal highlight for me was the Czech company Tilak. Definitely not a new player on the market since they are over 25 years old, but to be honest, I never had them on my radar.

They have a long background in outdoor equipment and started also doing clothing for military customers of the Czech Republic, who wanted Tilaks designs modified to their needs.

What got me personally interested was their use of Ventile fabric. This is a 100% cotton fabric of the highest grade of cotton, resulting in quite unique properties. Because of the weaving process and the fabric it becomes water resistant to a certain degree. It is also very light and quiet in comparison to other technical fabrics.

Saying this I will end my second report from IWA. Thank you for your patience! Next up will be a look at different gear companies.

One of those reviews I actually never wrote, even

Some shots of the @vanquestgear POCKET QUIVER 3X4

One of the many packs I am currently sporting when

Another search pic for you guys. Tried out the @ph

The next review will be about this badboy and some

The time has come... another review can be found o

It has been some time since I posted a drone pic.

It's been a while since I posted some camouflage c

Nitecore has some interesting stuff to offer. Let'

Back in Carinthia and putting the @anvknives P200

A perfect upgrade for my camera, with a brilliant