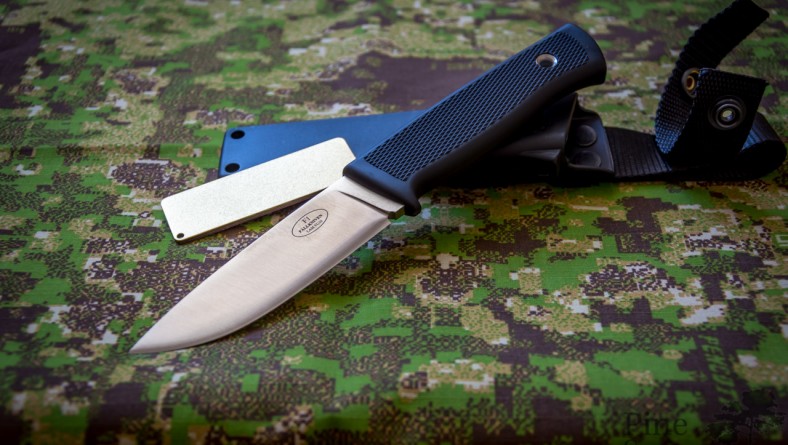 It has been a while now since I wrote about a knife on this blog and until now it was always about models which were not that much portrayed on the web or were completely outside of the mainstream. Today I would like to break that cycle and deliver something actually well known.

Because of the following knife I had to think about two sayings/quotes after getting it: „Look, the good lies so near.“ and „Never change a running system.“

The first one because I stumbled over the knife here in Vienna and the second because it is a model that is always listed under the top 10 of recommended knives when someone is desperately in search of a new working horse and is asking the online community for help.

Fallkniven wasn‘t really on my radar for a long time, mainly because of the same reason I unjustly neglected Bark River Knives for so long. The convex grind alienated me for no reason and kept me from buying the knives. Adding to that comes the fact that one likes to take a knife in the hand before purchasing it. Insofar no Fallkniven knives made it to my collection until now.

Look the good lies so near
As I visited the Viennese knife shop Lorenzi Stahlwaren recently (a definite must for a visit for everyone that comes to Vienna btw), I had the chance to close that gap. Besides that I realized there were not only large numbers of Fallkniven knives in stock, but also that I was in the store of the defacto Austrian wholesale dealer (since 1999) of Fallkniven AB.

In times of the internet one overlooks too easily what is lying in front of the own door. At Lorenzi Stahlwaren I was welcomed very friendly and immediately received the F1 for this Review.

Never change a running system – or maybe do?
The Fallkniven F1 is the official survival knife of the Swedish Air Force since 1995. The first knives were build in Solingen by the German company Linder, but soon the production was moved to the Japanese city of Seki, where the VG-10 steel was used as blade material. By now the knife is being made from a 3 layer laminate VG-10 steel, which is supposed to have an increased ability for sidewise stress.

The knife is also available in a PM-Steel variant, but I do not want to get that much into detail because it distracts from the actual test and presentation here.

The F1 is a classic scandinavian drop point design, middle sized and comes with a synthetic handle and a Zytel sheath. The balancing act between achieving strength, functionality and cost effectiveness was nicely accomplished. But lets start with some simple specs:

The Blade
As mentioned before the knife has a timeless drop point blade shape, which is used by various outdoor knives. This particular shape has proven itself and is more than feasible as you will see later on.

The 3 layer laminate steel was not completely grinded convex. The knife is a flat grind for the most part and starts to get convex not until the edge. At the same area you can see the different layers of the steel come to the light of day. It kind of reminds me somehow of a Hamon line – which it obviously isn’t.

The convex grind of the blade

Furthermore the blade features a minimal choil which not only gives the knife a nice overall look, but also makes the sharpening much more easier and spares the ricasso from damage during the process. The company’s logo is lasered on the left side of the blade together with the number of the knife model.

The spine was left edged to be able to strike sparks with a firesteel. Even here you can see the different layers of the laminate steel if you take a closer look at the spine.

You won’t find any jimping on the spine though. Honestly this would not fit the overall look of the knife in my opinion, but this is only my personal and subjective view. Either way I did not miss it by now.

Looking at the tip you will realize that the blade is not 100% symmetrical grinded, but I do not expect that from a serial production knife that is meant for the military and outdoor. Only from a custom collectible piece.

The handle
The knife is a full tang design and and the handle was sprayed/glued on [not sure about the right english term here]. The material is called “Thermorun” and feels warm and nonslip. Furthermore it features a diamond like structure which enhances the haptic experience enormously.

The sprayed on handle

I wouldn’t say the knife has dedicated finger grooves but the handle has an ergonomic rolling form that lies comfortable in the hand. And even if you won’t find a large guard there is a hint of a quillon as a protection against slipping into the blade with your hand.

The handle from the side

Furthermore you will find a lanyard hole, done with a hollow rivet. Obviously you can attach a lanyard here to secure the knife from loss or enhance the grip. It may have something to do with my hand size, but at least my little finger always lies on this hole with its fingertip, which makes the grip more comfortable.

The tang of the knife sticks out at the butt. One will find this a nice hammer that is not to be sneezed at.

Butt of the knife with the tang sticking out

Gripping styles
Taking the knife into the hand you immediately use the fencing grip because of the ergonomics. Because of the overall size of the knife you do not need a choil for a forward grip for finer work.

For really fine work the blade is easy to handle between thumb and index finger thanks to the flat profile of the knife. At the same time the ricasso rests on the ball of the thumb.

Even the reverse grip is very comfortable to use, if you need or want to.

The sheath
The sheath is an injection molded system. It is extremely light weight, features a large belt loop made out of webbing and secures the knife via a strap with a push button.

Knife in the sheath

The small lip on the side

The sheath is a typical example of a pragmatic mass production. Form follows function and this “function” is fulfilled more than enough by this sheath.

An interesting detail was showed to me in the store of Lorenzi Stahlwaren: The sheath is dimensioned in a way to carry the diamond whetstone of Fallkniven glued to the front. The two holes one can find at the end of the sheath (for wearing a cord to tie the sheath around the leg) will be slightly covered that way though.

Diamond wetstone by Fallkniven glued on the side

At the bottom of the sheath there is an amply opening that serves as a drainhole for dirt and fluids.

holes for leg tie and drainhole

Which brings me to the last observation in regard of the sheath. By today’s standards the sheath is not really compatible with gear and only useable on a belt. With some ingenuity you can surely attach it on some MOLLE equipment, but you will not find a functional Kydex- or Nylon sheath. As far as I was told, Fallkniven already had kydex sheaths but went for the Zytel versions, because they were able to produce and control them in house.
Either way the sheath is ideal for survival use since it is easy to clean and this is especially useful if you are hunting and have to deal with a soiled knife.
Last but not least it is worth mentioning, that there are of course leather sheaths available as well. Since I do not have one with me, I won’t go into more detail in that regard.

In Use
As with every other knife review I took the F1 with me to the forest and made a little video with the usual fooling around.

At first I took a broken down beech branch and shortened it to create a digging stick. Next I took some dry branches and made some pieces of firewood, batoning them into smaller pieces. Some of them I furthermore carved to feathersticks. To get some more fine kindling I shaved pieces from the wood.

After this different steps I did the following: With my digging stick I created a small hole and after putting the kindling with some dry gras into it, the fire steel was put to good use.

The edged spine of the F1 created enough sparks so that I only needed two attempts to start the fire.

As always I also put some stress on the tip of the blade and tested the resilience of it by stabbing a dead wooden trunk. Even if this might look clueless one might be in a situation some time when you want to know how much the tip can stand during stabbing and drilling.
Last but not least I cut down a hazelnut stick and tried some finer applications.

During all of this task the F1 proved itself a worthy tool. The cutting ability paid off more than you can imagine. The convex grind in combination with the steel makes the knife a scary sharp cutting tool. I realized that as I was about to shorten a screw anchor that stood out of the wall. Literally with one blow I cut it and nearly my finger as well.

The above mentioned tasks in the forest can be seen in the following video – this way you can see for yourself.

Back at home I cut a large cardboard box to pieces. The composition of these boxes is well known to be quite stressful to the cutting edge.
After the forest the knife was still able to shave, after the cardboard box it only had an average useable sharpness. That kept constant nevertheless and the sharpening afterwards was no real problem.

Fallkniven is well known to me for 10 years for sure by name. The F1 is always recommended to searching souls just because it is a worthy allrounder. And boy… it is!

Even though I wrote “Never change a running system” above, the knife went through different subtle changes and updates (laminate steel, PM-Steel, Micarta variantes etc.).

The timeliness and practicality have been proven by this knife for 20 years (!!!) of service now. Since 1995 the knife is part of the survival equipment of the swedish Air Force. I think this is a statement of its own and since I had the pleasure to use the knife myself in the last weeks, I can understand why it has been used for so long.

For hunters this knife might be very interesting for its cutting and stabbing ability as well as because of the pragmatic sheath. Outdoor enthusiasts as well should take a look at that knife if they are looking for the right tool and not just a collectible that goes straight to the display case.

The knife carries comfortable and low profile on the belt, is a pleasure to use and is basically a must have on the knife list.

For me it was and is a wonderful example that European designs and Japanese manufacture can bring out wonderful things. Insofar this definitely won’t be my last Fallkniven knife. In that regard I am really happy to have a longtime wholesale dealer in my vicinity.

Coming to an end I would like to say thank you to you for your patience and to Lorenzi Stahlwaren for giving me the opportunity to review this knife!