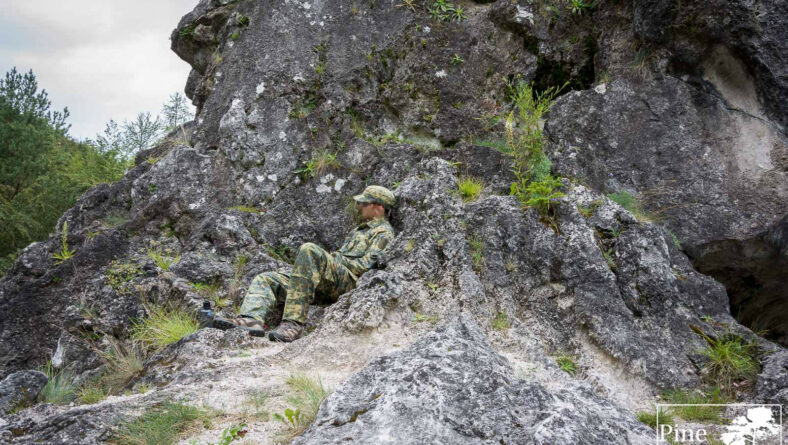 I already had the opportunity to introduce the new camouflage pattern of the Austrian Army (“Bundesheer”) in 2019. Called the “Tarnanzug Neu” (TN 17/20), this pattern was introduced to the public in 2017, trialed with the first battalion in 2019 and then fielded to the first troops in 2020. It is to replace the solid colored uniforms (RAL7013) in the coming years.

One of the ideas behind the pattern was not only for it to be universal, but also a camouflage that works in urban environments. Given the fact that today’s conflicts happen mostly in urban areas, this is a valid concept. Additionally, alpine warfare is a cornerstone of the Austrian Armed Forces, since more than 62% of the Austrian territory is mountainous.

With that being said, it was worth taking a closer look at the TN 17/20 in an urban and alpine setting.

As always I want to point out several important aspects beforehand. First of all, I do not claim any scientific standard with my camouflage comparisons. Also, I conduct them with my best knowledge and the available resources.

The pictures are usually taken at the same locations I normally use to make camouflage  comparisons. That way you can compare the various field tests I have done so far with each other.

The pattern was tested in a Central European urban environment (urban environments differ from country to country, region or continent). The same can be said about the mountain pictures. Depending on the geological area, the stone compositions can be completely different. Information about the various locations will be stated in the subsections. The pictures portray three different positions:

As always I photographed the pattern with a wide angle lens at first and then with 35mm focal length, which  mimics the actual picture the human eye would perceive at this distance. Having in mind the three different positions mentioned before, I usually end up with 6 pictures of each location.

Furthermore:
Given the amount of pictures in my field tests, I will not describe or comment on each picture. Instead I will give a more thorough analysis at the end of each location subsection.

With that being said, let’s take a closer look at the pictures themselves.

Location 1 is an abandoned sawmill which is partly overgrown with vegetation. You can find everything from tarmac areas, to concrete walls, stone walls or white painted walls. That plus the occasional rusted iron debris.

As a result, a very diverse urban environment is at display here. The distance to the camera is roughly 10m. The weather was cloudy with soft light – so shadows were no issue at this point.

As you can see from the wide angle pictures, the colours of the Tarnanzug Neu merge into different shades and coloration from the distance. This is something I already mentioned in the initial review and as far as I know this is an intended effect by the designers.

In this setting the bluish grey and green components of the pattern are of particular interest. They are giving the Tarnanzug Neu pattern the necessary coloration to blend into this particular urban environment. In contrast to the light and dark brown colours (which are very common in urban settings) you will find a very effective macro element at this distance. Looking at the standing position, you can see how the silhouette is disrupted and the colours blend into the background. Kneeling down enhances this effect, just like laying down.

When looking at the actual distance of 10m (35mm focal length), you can not only see the macro elements I was talking about, but also various midi elements, which give the Tarnanzug Neu a more noisier look. The disruption of the silhouette works rather well for a universal camouflage pattern and especially in this urban setting the pattern is doing an effective job.

The kneeling position as well as the prone position are additional examples for the above mentioned observations.

What you can see –  and this is a result of the uniform being fairly new and unused – is the typical fabric shine of the PolyCo Material used. While this fades after some washing cycles, so does the colour, if you look at some pictures of the Austrian Army.

Last but not least: it is obvious that the background is key in this setting. A few meters to the side, the effect would not be as apparent because of the solid colour wall. This underlines the difficulty of urban terrain. This is also the reason why you get taught in basic training to be aware of your surroundings and move accordingly.

The second location is also at the abandoned lot, but at a spot where material was stored. The floor is of tarmac, while the wall is concrete. Again, nature has found its way back and together with the debris in the back, as well as remnants of boxes and the like, you will find a diverse setting. The distance here is between 5-10m and the weather conditions are the same, since I did the pictures on the same day: cloudy with soft light, no shadows.

Generally speaking you have similar effects like in the first location: The bluish grey and the green merge together to a particular new colour shade and disrupt the silhouette by creating a stark contrast to the tan/khaki colours. And while the person standing is still visible (after all this is no sci-fi “predator” cloak) the time to identify the silhouette is drastically prolonged, which is vital in combat situations.

Kneeling down has the same effect as always, namely changing the human silhouette as a whole and making the target smaller. The colours blend into the surroundings in a decent manner and do enough to blend in. Laying down has a bit of a negative effect in this setting, since the back is fully exposed to the light from above, thus making all the colours lighter.

Looking at the pictures done with the 35mm focal length you can see the different shades of the midi elements again. The macro elements get some more depth and organic feels, while the light and dark browns create not only a very effective and disruptive contrast, but also additional shades and fading effects. When it comes to the kneeling and prone position, the above mentioned observations apply.

Changing from an urban to an alpine setting, the Tarnanzug Neu (TN 17/20) was quite the surprise for me. Just like for urban environments, the TN 17/20 did remarkably well in my “alpine/mountainous” testing spot.

This location is already knownfrom my “alpine camouflage” reviews. It is a typical rock formation you would find in mountainous or alpine regions, with the occasional vegetation.

The distance to the camera is 15-20m, the weather was cloudy, rainy, resulting in soft light.

With the wide angle lens the distance of 15-20m looks a bit further away. Especially in this spot the bluish grey is an excellent fit to blend in. Additionally the light brown and green elements add to the blending effect.

While the apparent macro element does its magic with the disruption, it also works by blending into the stone background. So even while standing in the open, the silhouette is barely visible and this distance is already considered close range!

Kneeling down, or leaning to the rock face even amplifies this effect. The light brown mixes well with the lighter areas, creating that disruptive effect I mentioned above.

At this point I would sound repetitive, when describing the pictures done with 35mm focal length. The effect is obvious and the pictures speak for themselves.

While the Tarnanzug Neu (TN 17/20) is not as good as RAL7013 in green environments like forests, especially in Autumn, it does remarkably well in urban and mountainous locations. The bluish grey elements of the pattern add that flexibility to this universal pattern, making it a decent multitasker with an emphasis on urban scenarios.

Rumor has it that the colours have been a bit changed with the newest print batches, making the overall appearance of the pattern darker. I cannot comment on that, since I have nothing to compare it with – but I heard this from various sources outside and inside of the Austrian Army.

Another thing worth noting is that at the moment there are additional items for the soldiers in the works. The journal of the Austrian Army, called “Truppendienst”, reported that there will be rain gear, combat shirts and possibly even softshells in the new camouflage pattern. Next to technical apparel there are also pictures of load bearing equipment and pouches floating through the internet.

This is a promising development, considering that there were no plans for camouflaged 2nd or 3rd line gear in the initial fielding of the uniform.

One has to say though that this is a long process, which has already been delayed by the pandemic, political quarrels and the everlasting budget problems of the Austrian Army.

One last thing – since I get asked alot where to find this camouflage: The simple answer is nowhere. Just like the German Multitarn, the Tarnanzug Neu TN 17/20 is a restricted item, only to be distributed to the Armed Forces of Austria. There are no items for sale in the open market, and if they are, they are either no original surplus, counterfeits, or stolen goods. The reality is that only a handful of units in Austria are fielded with this camouflage as of now, so the probability of some surplus hitting the market in the coming years is minimal.

As always I hope I was able to give you a decent overview of this camouflage pattern.

Many thanks for the continuing support from all sides!