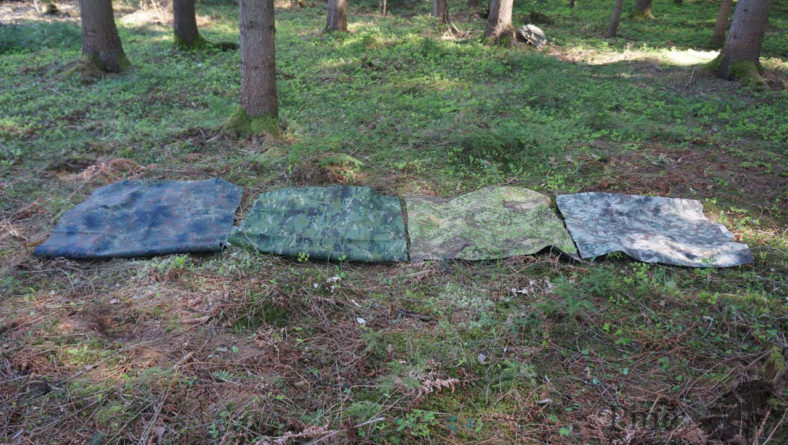 Thanks to the guys at Tacticaltrim I was able to extend my personal camouflage experiments even further and can present you hereby an addition to my previous fieldtests. After an extensive discussion we decided to take a look at four specific camouflage patterns which are suited for our European region.

Some introductionary remarks:
As always I do not claim to make any „scientific“ findings with this tests. These images are meant to give a simple impression on how these particular patterns work in a natural environment.
The pictures were not edited in any way except of the assembly of the 4 in 1 collages. This time I decided to put four pictures in one to keep the review short and not as pic heavy as before. Also I intend to allow a better way of comparison between the different patterns this way. The pictures were exported at a higher resolution to allow a closer look if necessary.

The different patterns which will be compared:

At this point it is worth mentioning that Cordura fabrics are slightly darker because of the dyeing process, and the specific properties of the nylon fabric. Nevertheless the differences are not that distinctive that the comparison would be illegitimate. The only real difference is the fact that the Cordura fabric does not produce big folds – a fact which works in favor for the different patterns since there won‘t be too much shadows, which could reveal the cloths.

At first a closer look at the different patterns:

This time I am going to compare specific patterns which are meant for temperate climates and jungle environments. The following pictures are marked with the lenght of the fabrics and I have also highlighted some of the repetitions of the pattern to give a better impression of them.

PenCott Greenzone:
This pattern was reviewed exstensively by me and does not need further presentation. Here is a link to my review on PenCott.
The Greenzone cloth is made out of 50/50 NyCo and is known from my previous field tests. It is smaller than the rest of the shown fabrics because I ordered it before the others and had it sewn to 105×105 cm.

Multicam Tropic:
Multicam Tropic is Crye Precision‘s answer to the US Army Camouflage Improvement Effort and features the original Multicam pattern in a different color range. It is made primarily out of micro and midi elements and a few macro elements in the background. Some of the transitions are blurred, which made Multicam so prominent.
The 500den Cordura is slighty stiff but shapeable at the same time. The print is clean and has a quality feel to it.

BW Flecktarn:
I think it is not necessary to introduce the Flecktarn of the German Bundeswehr. The pattern is known worldwide and was able to stand its ground for a long time. Here we find big macro elements which are made out of small dots.
The material has a different feel to it than the Cordura which is printed by Duro Industries. Especially the bottom side is much smoother and feels slightly rubberized. This print is also very clean and has the same quality feel to it.

Kryptek Mandrake:
Kryptek is also one of the four companies which made it to the finals of the US Army Camouflage Improvement Effort. The pattern is supposed to create a 3D effect with its comb shaped geometries which break up the human silhouette even further. The elements are comprised of midi and macro shapes.
The 500den Cordura of Kryptek is far more softer than the other two Cordura fabrics. Also the print is more palish in comparison.

Since my previous locations are not accessible due to deforestation and snow damage, I was looking for different places.

Location 1: Scarp, open field with direct sunlight. The fabrics are lined up at knee height. Distance: 20 to 25 metres.

Here one can observe that all patterns fullfill their task by blending in with their environment. Basically you can only detect the fabrics because of the folds and the generated shadows.

PenCott Greenzone blends in completely with its background. Multicam Tropic does so too, but the pattern itself is no longer noticeable compared to Greenzone. Thus a solid color would achieve the same effect. On the contrary one can see the elements of the Flecktarn pattern very much, but it is far too dark and can be detected much faster than the others. Kryptek Mandrake blurs into one solid color as well due to the palish print. It is the most brightest of all the patterns.

Location 2: Dense forest with bushes, scattered sunlight spots. I chose a bright background to work with outlines. The fabrics are hanging at chest height. Distance 10-15 metres.

At this distance the specifics and shapes of each pattern become more evident. As mentioned before only the shadows of the folds give away the different fabrics.

PenCott Greenzone has the best color range for this conditions. The macro elements are clearly visible and the brownish colors are working their magic to blend in with the surroundings.
Multicam Tropic is more darker in this environment and gets a little bit blueish. The pattern itself is hardly visible, but visible nonetheless. The difference to Greenzone is striking and Tropic is not as convincing as at Location 1.
BW Flecktarn is a black blur here as well. The pattern itself is visible but dominated by its black elements.
Mandrake is the brightest pattern again. The comb shaped design appears organic but it fails to blend in with the environment. It would need more green colors and a stronger print.

Location 3: Clear forest, some brush, scattered sunlight spots. The fabrics are thrown over a backpack, leaning to a tree. Shin height, distance: 15-20 metres.

Here the different patterns equal each other a little bit as far as effectiveness goes.

Greenzone can only be found because of the fold. In the coniferous forest of Europe this pattern is unbeaten in my opinion. The macro elements with their brown and green colors blend in with their surroundings outstandingly.
Multicam Tropic is well suited to this environment as well because of its color range, but it could do more with more contrast in the pattern. In my perception it comes after Greenzone.
BW Flecktarn works better here. It is still a little bit too dark but far from the black blur it was in the previous settings. The rusty brown tones blend in well with the background, breaking up the silhouette quite well.
Again Kryptek Mandrake is the brightest of all the patterns. At this range the combs blur into snakelike lines which would break up the shape quite well, if the color range would be different.

On the next picture I zoomed in with my camera:

In doing so my above mentioned comments become more clear. Greenzone profits from its complex mixture of micro-, midi-, and macro elements in combination with the right color range.
Multicam Tropic is suited well with its colors but lacks some of the distincitve contrasts which would help with breaking up the shape.
BW Flecktarn and Mandrake appear more like rocks. A change of colors would be necessary to blend in with the vegetation.

At the very end I took a picture with all of the fabrics in a group and put each of them at the bottom of a nearby tree. The moss at the bottom is always a good way to demonstrate the naturalness of a pattern. But pictures show more than words can tell:

In this review three camouflage patterns, which are fairly new on the market plus an old one, were compared with each other: Multicam Tropic, PenCott Greenzone, Kryptek Mandrake and BW Flecktarn. The last one was added because of continuous inquiries on previous reviews.
All of the patterns are made for temperate climates but also for tropic environments. The test also showed the problems the US Army had to deal with in terms of empiric data – not the beurocratic problems of the system. Meaning: The more data you collect, the more it alligns to same findings. Because every pattern can prove itself in a specific environment in which another one would fail.

For me personally the fieldtest showed that Pencott Greenzone is still the best of these patterns in temperate environments. Crye Precision‘s Multicam Tropic is close but cannot deliver the same effectiveness.
Mandrake left me with mixed feelings. The pattern looks bizarre and works rather well, but could not convince me in any of the locations. It would need more green colors.
BW Flecktarn did not surprise me, I know it is a good pattern, but also that it is too dark. Black simply has no place in camouflage patterns except urban ones.

My hope is that I could give you guys a nice comparison with this pictures and also an impression on how these patterns work in nature. Thank you for your time and patience!

Next will be a similar field test with arid patterns. So stay tuned!

PS:
On a funny sidenote: My mother got hold of the different patterns and was excited about Mandrake. She could imagine herself with a bag made out of it, with matching leather parts. Her response to my remark, that I would prefer Tropic over Mandrake (fashion wise) she responded: „Of course… it is more masculine!“.