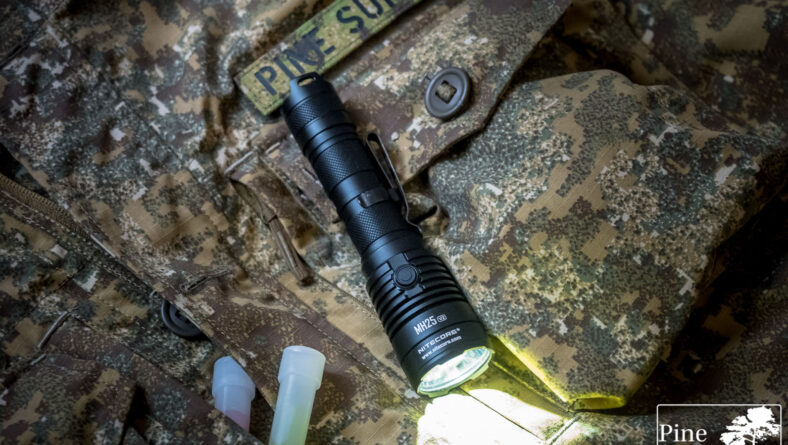 Thanks to Nitecore I am able to give you another flashlight article – this time about the Nitecore MH25 V2. To be honest, this review is way overdue, but I finally found the time to sit down and finish this one.

With that being said, let’s jump into the overview and specs, before going into more detail.

The Nitecore MH 25 V2 is designed as an all-rounder, providing not only a tactical, but also daily use mode with different settings. It is version 2 and features a maximum of 1300 lumens and a throw of 475m, with no particular info on the LED. It comes with an Nitecore 21700 (NL2150) Li-Ion battery (5000mAh), but can also be powered by two 2 x CR123A or 1x 18650 lithium batteries. It features 4 brightness levels and 3 different modes – high, medium, low, ultra low as well as beacon, sos, and a randomly changing strobe.

The Nitecore MH25 V2 comes with a detachable Clip, a holster, a Usb-c charging cable, a spare O-Ring, Lanyard as well as a battery magazine.

Build Up of the Nitecore MH25 V2

This model of the Nitecore MH25 is the second implementation of the flashlight, improving throw, the speed of recharging and endurance. The head of the lamp not only features the USB-C charging port (sealed), but also the mode switch, made of metal, on the opposite site.

It also shows deep grooves for heat management – providing larger areas to distribute heat and establish a cooling factor. The improved throw up to 475m is achieved by an optical system that is combined with crystal coating as well as, what Nitecore calls, the “Precision Digital Optics Technology (PDOT).

A very inconspicuous bezel can also be found, which provides a minimum of strike force, if needed.

The body of the lamp features clean machining and grooves to attach the clip. Depending on how you need it, you have two options to ride the clip higher or lower. The tail section features a U-shape, which not only prevents the tactical tail switch from being accidentally activated, but also makes the Nitecore MH45 V2 stand, if needed.

While the tactical tail switch offers the usual functions like switching on the lamp permanently, or activating it momentarily with a light press – the mode button on the side of the lamp offers various modes to choose from.

Modes of the Nitecore MH25 V2

First of all, you can switch between a Daily Mode and a Tactical Mode of the lamp:

Daily Mode: 4 brightness modes plus 3 special modes (Strobe, Beacon, SOS). In this mode the lamp memorizes any of the modes when reactivated – except the Beacon and SOS.

Tactical Mode: 4 brightness modes plus strobe. The lamp memorizes only high level and strobe, when reactivated.

Just like other Nitecore flashlights I had in my hands, the MH25 V2 is excellently manufactured. The parts are machined in a clean fashion and feature a hard anodized finish which is HA III military grade. Edges are beveled and the flashlight feels comfortable in the hand. The screw threads are also clean and run smoothly.

The overall look and feel of the lamp is not only high quality but also professional grade.

The Nitecore MH25 V2 in use

The USB charging function of the flashlight is straightforward and easy. A sealed port on the lamp allows the user to attach a USB-C cable to the lamp. When doing so the blue indicator light will start to slowly flash until the battery is charged. Nitecore includes the NL2150 battery with 5,000mAh in the package. One thing that immediately stood out was the fact that the charging port is on the opposite side of the mode button. It happened more than once that I mistook the sealed port for the mode button in the dark – something one has to keep in mind. This issue becomes more apparent when using gloves.

Just like the P201 the flashlight gets hot quite quickly in its brightest mode (high). And even though the heat stays at the front of the lamp, it also gets warm around the grip. However, it also cools off quickly because of the construction and material. Adding to that the MH25 V2 also features Nitecore’s Advanced Temperature Regulation (ATR), which regulates the output in order to provide an optimal performance.

Switching through modes is very intuitive. The same can be said about switching between the tactical and daily mode: Holding the mode button while the lamp is switched off and clicking the tail button once, it changes between the two modes and signals the chosen mode by flashing once (ovce) or twice (tactical).

The beacon and SOS signal are self explanatory and need no explanation. The strobe however, with its varying frequency, is quite intense and works effectively.

Shock resistance for falls up to 2m was incorporated into the design.

What is also rather useful is the U-shaped tail section. It not only allows you to attach a lanyard, but also to put the lamp on the ground, making it stand up.

A flashlight review should always include some beamshots to get a better impression.

The last pic showing me from the distance, is taken with a shutter speed of 1,0 sec.

This picture shows the lamp with the full 1300 Lumens illuminating a field. While the beam is directed at the center of the field, roughly 100m away, the trees in the distance are 200m from the camera. This shows the power of the lamp quite clearly.

The following pictures show the spot of the Nitecore MH25 V2 directed at a large tree roughly 30m away.

The Ultralow setting manages to give enough light to see the tree, without giving too much attention to the flashlight and its user itself, as well as being very comfortable to the eye, making a change between dark and illumination very easy.

Changing to 50 Lumens of the Low setting, the tree trunk is clearly visible, as well as the vegetation next to it. The way to the tree itself is illuminated as well. The power of the beam is strong enough to navigate without stressing the eyes too much.

The Mid Setting with 300 Lumens clearly illuminates a wide area. While the spot is clearly visible on the tree, the beam makes for an even distribution of light in the vicinity.

Changing to 1300 Lumens at this distance shows a vast increase in brightness on the tree itself. The beam is not that much different, but increased in brightness as well.

Directly on the floor

The last three beamshots show the spot and beam when directly aimed at the ground below.

While the change between the settings already looks drastic in the pictures, one also has to bear in mind that the camera had to change settings to accomodate to the brightness.

With the MH25 V2 Nitecore has once more proven to be able to improve their products successfully. The increase in brightness and battery performance make the flashlight a reliable companion for professional and everyday use. The two modes make the lamp even more versatile, targeting not only the EDC market but also the tactical one.

With this strong flashlight, professionals and citizens are perfectly equipped for a wide range of uses. Especially in the search and rescue area, this lamp is a strong addition to any equipment, given its range, and throw. The picture of the illuminated field speaks for itself,

As always the lamp comes with useful accessories as well as various options to modify it according to one’s use – these are sold separately.

Just like the P20i the Nitecore MH25 V2 convinces with a clean manufacture, the ease of use as well as an awesome look and feel.

With that being said, I want to thank you for reading, many thanks to Nitecore for giving me the chance to take a closer look at the lamp (as well as having the patience).

Staring straight at 'ya! First real snow and time

New review is online! This time I am taking a clos

As it seems more and more pictures of the Tarnanzu

During my last stay in Carinthia I made plenty of

Seems like today is Kreuzotter day. Here is one of

Wouldn't mind taking that ride out for a drive - a

When you find "the spot". I am a huge fan of Aust

Little photosession with the @tasmaniantiger_gear

I just put an Patreon Exclusive article on Pine Su

Decided to take a dive into my collection and foun

Patrons will find the full article on the @ufproge

Some more impressions of the Nationalfeiertag 2022

Who ordered some downwash? A Blackhawk of the Aust