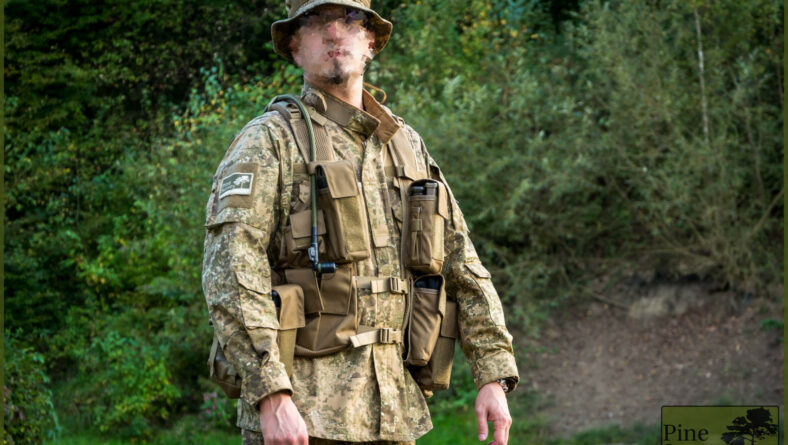 In early 2017 I wrote an extensive review on the SADF P83 Battle Jacket, announcing to follow up on the KarrimorSF Predator Combat vest in a separate review. I never did – until now. Reason for that was the discontinuation of the vest and me not seeing a point in writing up anything about a product that would not be available anymore.

However, once in a while or better said several times per year I get messages from users who inquire about the second part and where to find it.

I think it is about time to make up on my promise and deliver. So here we go: the KarrimorSf Predator Combat Vest!

In my article about the P83 Battle Jacket I mentioned the popularity of said combat vest among the SF units of the British Commonwealth. KarrimorSF, as one of the biggest army contractors took the design of the South African vest and updated the design in severals aspects. First of all, several color choices  were implemented as well as a big change to the backside of the vest as we will see shortly.

Starting with the front one will find one magazine pouch left and right, positioned at the chest, each capable of holding two M4/AR15 magazines. Plenty of velcro makes the adjustment of the magazine flap easy. Even when using magpuls these will close, barely however. To keep the magazines from rattling, the pouches feature internal dividers.

Just like the original P83 Battle Jacket, the magazine pouches on the chest feature small slots for chemlights or pen flares. They are compressed by elastic webbing to keep the flares or chem lights in place.

Next to the mag pouches, to the direction of the armpits are compass/grenade pouches. Cigarette packs fit in just as nicely. In total you will find two of them on the left and right.

Focusing on the right side of the vest (from the perspective of the user) one will find two velcro pockets to the center. They either can be used for magazines or smoke grenades.

On the users 4 o’clock there is a large general purpose (GP) pouch which is closed by two large buckles. It is large enough to hold different items, like your mess kit, two 1l canteens or one 2l canteen. It depends on the user’s needs.

In any case, just like with the SADF P83 battle jacket, the GP pouch also has a double magazine pouch on the side aiming to the front. It also features dividers, similar to the ones on the chest.

The left side of the vest (again from the user’s perspective) features two GP pouches. A large one with a double magazine pouch on it on the side – the users 8 o’clock. And a smaller GP pouch to the front, which is large enough for a personal IFAK. Contrary to the P83 battle jacket, the GP Pouches do not have velcro openings in the flaps covering the pouches – they also have mesh bottoms for drainage and light.

By now one can see how close to the original the Predator Combat Vest actually is. Especially when looking at the map compartment, hidden under the GP pouches of the left side. The KarrimorSF vest is also closed the same way, using two straps with buckles on the front.

When looking at the backside, one will see the major difference between the two combat vests. The KarrimorSF Predator Combat Vest does not feature the distinctive two-compartment, sewn-on backpack pouch. Instead it features a large compartment for the soldiers water bladder. Closed by a large flap with PALS on it, the hydration compartment holds enough room for 2l and larger bladders.

Looking closer at the back one will also see the PLCE zippers on the sides, plus the two buckles on the top and bottom – which are also characteristic for the PLCE system (Personal Load Carriage Equipment). There are several different PLCE pouches available that can be mounted on this panel, ranging from large GP Compartments to Magazine panels.

Adding to that, the vest features a grab handle on the backside. Good to carry it around, or grab a wounded soldier.

Other features are similar to the P83 Battle jacket. The KarrimorSF Predator Combat Vest can be adjusted in height and width, using the straps and buckles on the shoulder straps as well on 5 and 7 o’clock in the rear. These provide plenty of room to wear the combat vest over heavier ballistic protection, as shown in the picture.

Next to the magazine pockets on the chest are also small webbing loops to lace through comms cables, or lanyards, carbines etc.

Looking at both vests one can say that they are almost similar, yet completely different.

KarrimorSF has a high quality of manufacture and also uses top notch materials. One will notice that on their packs and vest a different fabric than cordura is being used. However this Nylon is just as strong and features DWR as well as IR properties. the regular user would not feel or see a difference, if not told.

The vest itself is manufactured in an excellent way. Stress areas are reinforced, seam tape covers exposed seams and everything feels and looks tight and strong. The only thing I noticed was that the corners of the shoulder strap interface are not as cleanly finished and feature some sharp edges that might result in chafing on the neck.

The KarrimorSF Predator Combat Vest is a worthy descendant of the original P83 Battle Jacket, featuring the same load carrying capability on the front, while offering more options for modularity on the backside. The possibility to mount different PLCE panels on the back give the user the option to equip according to the mission or the soldier’s duties, bringing the vest up to today’s standards.

Just like the P83 the vest was or is a decent option, if you don’t need too much modularity for your soldiers and want to train them all on the same load carrying system alike.

Unfortunately KarrimorSF discontinued the Predator Combat Vest a while ago. Nevertheless they also did custom versions of it, like the AK Patrol vest for Morane Tactical, which was a custom job for Belgian SF units. This version had a different outlay, specifically for larger AK magazines, among others.

With that being said, I hope the review was worth the wait and also serves as a reference for gear enthusiasts in the future.

Thank you for your support and many thx to KarrimorSF for providing the vest back in 2016.

As always I appreciate every support!