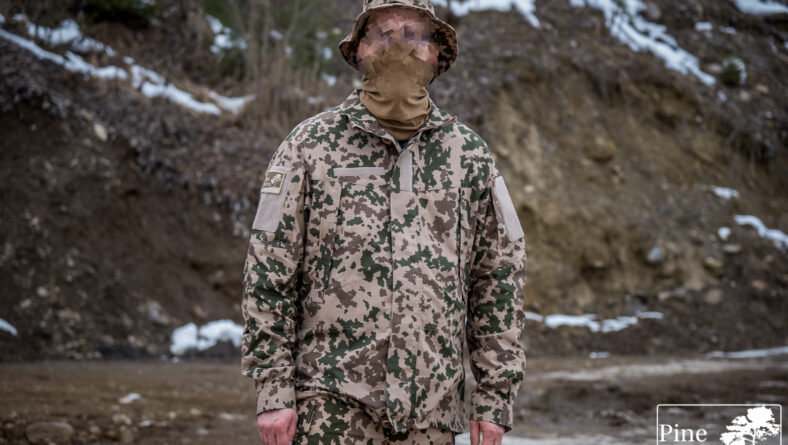 Despite the current temperatures, or even because of them, I want to take a look at a cool topic – literally and figuratively: Desert camouflage in winter time. Some years back, I did an article on transitional camouflage patterns in winter environments, arguing that they are suitable for use in such scenarios because of their coloration.

So in this series I want to take a closer look at how desert patterns perform in a winter environment. As previously mentioned in my series on winter camouflage patterns, this also comes with the notion that not all armies can or want to field winter kits.

Setting my plans in motion, I had the chance to get my hands on some issued and commercial patterns which I will be looking at in detail.

Starting with this series will be Finnish M04 Desert camouflage – Courtesy of Varusteleka.

Finland actually developed a new desert camouflage before its widely known M05 standard camo for temperate climates. The reason for that was the deployment of troops to hot arid countries on peacekeeping missions. Nicknamed hellekuvio (“heatwave pattern”) the pattern is made of green and brown pixelated elements on a khaki/tan base color. For some M04 will somewhat resemble German 3 Farb FT (Flecktarn) because of their similar colors, however the Finnish M04 uses unique, pixelated micro and midi elements.

Varusteleka provided me with a full set to make this field test possible. If you are interested in such uniforms (and also if you want to show Varusteleka that it was worth their effort), follow these links – or let them know who sent you. This might help future field tests.

With that being said, I will go over the usual methodic caveats, before looking at the field test. This is mostly copy & paste – so returning readers can jump to the next section.

As always I want to point out several important aspects beforehand. First of all, I do not claim any scientific standard with my camouflage comparisons. I also conduct them with my best knowledge and the available resources.

The pictures are usually taken at the same locations I always use for my camouflage  comparisons. That way you can compare the various field tests I have done so far with each other. Recently my main spot was completely lost to deforestation, so I had to add a new location, and since I am looking at Desert Camouflage patterns, I also added a large gravel/sand pit to the mix.

The pattern was tested in a Central European environment. Information about the various locations will be stated in the subsections. The pictures usually portray three different positions:

As always I photographed the pattern with a wide angle lens at first and then with 35mm focal length, which mimics the actual picture the human eye would perceive at this distance. Having in mind the three different positions mentioned before, I usually end up with 6 pictures of each location.

Given the amount of pictures in my field tests, I will continue with my modus operandi from previous camo reviews and not describe or comment on each picture. Instead I will give a more thorough analysis at the end of each subsection.

With that being said, let’s take a closer look at the pictures themselves.

As already mentioned, my main location was cut down on a large basis. As a result I had to find a suitable replacement. This one is right next to Location 2, but in a different direction. Just like the previous location this one is a typical European mixed forest with a high foliage canopy and some basic bushes, ferns and little trees on the ground.

During winter this location was covered in a barely interrupted snow surface, resulting in a dominant white environment, with tree trunks and cut branches contrasting the picture.

The pictures were taken before noon under a partially cloudy sky with occasional sun beams.

The camera is standing roughly 20 away from the human silhouette.

Obviously the whole forest floor is covered with white snow, making everything in a different color stand out – however, all the tree trunks, the underbrush above snow level as well as evergreen branches feature brown grays and greens.

Having this in mind, the colors of Finnish M04 perfectly resemble the surrounding tree trunks and their bark. Because of the light, the overall appearance looks darker as expected and the midi and micro elements of the pattern blend in nicely with their organic feel. In the standing position (wide angle lens) the primary give away are both legs, which form a triangle. Other than that, the camouflage works excellent in this environment. In the kneeling position this becomes more apparent, as the overall silhouette is lower to the ground, making the blending effect work better.

The pictures using 35mm focal length give a better idea about said blending effect and the organic look of the micro and midi patterns. While the legs are the only part that attract attention, the overall brown look of M04 has an excellent blending capability in this setting. The above mentioned remarks on the kneeling position apply here as well.

This location is widely known from previous tests. It is a mixture of deciduous and coniferous forest. As mentioned in other reviews, it changed a bit as there is now a huge pile of cut branches on one side. And since most of the leaves fell off during autumn you can see further back into the forest. At the same time the snow covered surroundings produce a monotone environment only disrupted by the dark tree trunks.

The pictures were taken before noon under a clouded sky and the camera is standing roughly 15m away from the human silhouette.

Location number 2 is even brighter because of the snow and as a result of the added light reflecting from the surface, M04 looks brighter than in Location 1. Looking at the standing position and using the wide angle lens, the micro and midi elements of M04 are clearly creating the above mentioned organic look. The colors fit the surrounding trees and cut branches nearby. Just like in the previous setting, the legs are the biggest give-away at such a short distance. Other than that, the blending effect works efficiently. This becomes more apparent in the kneeling position as most of the silhouette vanishes and the overall look of a stone or trunk forms. Especially in the prone, one could only suspect a stone on the floor. In this regard, the green and dark brown elements of the pattern are very effective in creating a natural appearance.

Taking a closer look at the standing position using 35mm focal length, one actually gets a perfect presentation of the M04 pattern in a snowy environment. While the blending effect of the three colors is obvious, one can actually also see a slight disruptive effect. The kneeling position once more shows the exposing effect of one’s legs. However, the silhouette is not standing out as much, as one would suspect against such a bright white backdrop. The prone position underlines my remarks above, pointing out the organic look of M04 and reducing what is left of the person to a resemblance of a stone.

Location number three is an all new site, located directly near a gravel/sand pit. Being made of a dirt road, plenty of areas of sand, earth, rocks and torn up vegetation, it gives an interesting mix of dry sand, wet earth and everything in between.

Snow is covering the area only partially, so this is the environment I was actually aiming for, when thinking of this test.

The pictures were taken around noon under a clouded sky and the camera is standing roughly 25m away from the human silhouette.

Last but not least, coming to a setting which I had in mind from the beginning. Location number 3 was a wonderful example for an environment with snow and dead vegetation. In this case the M04 pattern was also partly in its intended environment – sand and rocks.

The pictures using a wide angle lens provide an excellent example of the blending capabilities of M04 in such an environment. The human silhouette is barely visible as a result of the tan base color and the brown and green micro and midi elements in the pattern. Not even the legs are a give away, as they melt into the background. Kneeling down further improves this effect and if you wouldn’t know what to look for, one might not see anything.

Getting closer at 35mm focal length and having a picture of what the human eye would actually see, my remarks become more graspable. The micro and midi elements (dark brown and green) not only form an organic look, but also display disruptive results. This, in combination with the blending effect of the colors make for an excellent example of successful camouflage.

Again, kneeling down improves this effect and I think that by now I do not have to explain anything anymore.

While the initial idea of this field test series was to show desert camouflage patterns in partly snow covered environments, nature and available time insisted on doing these in a full winter environment. However the start of this series showed the feasibility of desert camouflage in winter nevertheless.

Finnish M04 desert camouflage proved to be an excellent example of the blending effect of midi and micro elements in dark brown and green color. The overall arid appearance perfectly blended with the dead vegetation of winter, tree trunks and also the torn up earth of sand pits during this particular season.

As a result one can come to the same conclusions as in a previous field test here on transitional camouflage: The arid appearance of these patterns make them clearly effective in winter environments. And just like Finnish M05 Winter camouflage, M04 Desert showed the effectiveness of Finnish camouflage patterns.

As already mentioned, I have to thank Varusteleka for making this field test possible. I will also take a closer look at the uniform itself. Until then, check out the Särmä uniforms directly at Varusteleka:

With that being said, thank you for reading!

As always, feel free to contribute to the blog: