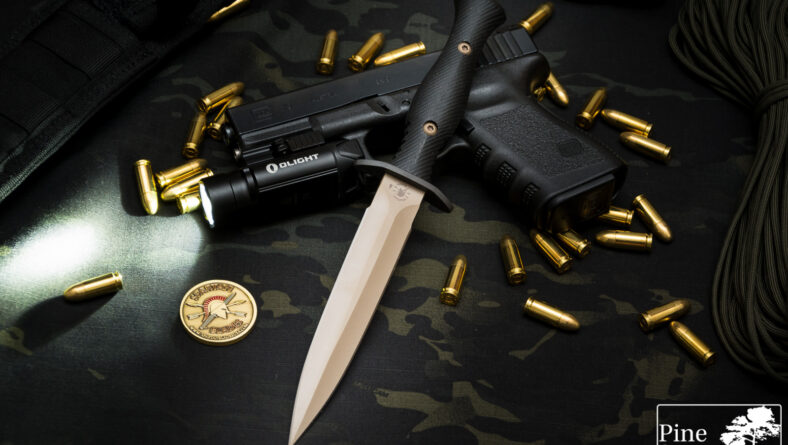 The Spartan Harsey Dagger by Spartan Blades is such a distinct design, that it is not only immediately recognizable, but also a clear statement for a purpose driven, military fighting knife. Luckily Curtis Iovito was kind enough to trust me once again in doing a knife review, which is why I can take a closer look at this gorgeous blade.

By now I have 11 knives of Spartan Blades in my possession, I would say this speaks volumes about my high opinion of their knives. Nevertheless, I will try to do my best to give you a balanced review on the Spartan Harsey Dagger.

So let’s start with a brief overview and the specs for those in a hurry, before going into more detail.

Designed by the renowned knifemaker William “Bill” Harsey, the Spartan Harsey Dagger is a straight forward combat dagger. Made of CPM S35VN steel, with a 3D contoured Canvas Micarta handle and a dedicated crossguard, the knife weighs about 6,72 oz / 190 grams. The dagger features an overall length of 10 3/4 inches or 27,5 cm, with a blade length of 6 inch or 15,5 cm. It comes with either a Cordura sheath made by First Spear or a Kydex sheath.

Introduced in 2020, the Spartan Harsey Dagger is another successful collaboration between William Harsey and Spartan Blades. Mr. Harsey is a renowned designer and knife maker and well known for his knives for the US Green Berets and iconic knives like the Green Beret, made by Chris Reeve Knives.

While he was involved in several other dagger designs over the years, through assistance and consulting, he never had his name on a dagger – according to Curtis Iovito (Co-Founder of Spartan Blades). So with that in mind, Curtis Iovito pitched the idea of a dagger to William Harsey, which would be an evolution of the Gerber Mark 2 and the Applegate-Fairbairn daggers, designed specifically to the needs of special forces soldiers.

The reason was simple: After getting feedback from special forces soldiers, it became clear that specific missions still ask for a reliable knife as a backup, which solely fits a combat role and not any other traditional military field knife concepts. As it turns out, close quarter combat knives are still needed on a regular basis and soldiers still find themselves in knife fights – and for this scenario daggers are still among the most effective blade shapes, especially when it comes to penetrating several layers of clothing or webbing gear.

The Blade of the Spartan Harsey Dagger

Looking at the 6” or 15,5 cm blade, one will notice that the dagger design is a hollow grind and as perfect as one can wish for. Especially with daggers, this is always a challenge. Using CPM S35VN Steel, the blade is double deep cryogenic heat treated and has a hardness of 59-61 HRC.

The blade itself is coated using a PVD process: Tungsten DLC (diamond like carbon) for the black blades and ZrN (zirconium nitride coating) for the Flat Dark Earth color.

Laser markings show the Spartan Blades and Pineland Cutlery logo on one side, and the signature of William Harsey as well as the steel designation on the other.

The blade itself comes as pointy as one can imagine and is razor sharp out of the box.

Handle of the Spartan Harsey Dagger

The 3D contoured handle is designed with the best grip performance in mind. Not only when it comes to pushing/stabbing motions, but also pulling.

Made of black Canvas Micarta, the two handle scales are tightly fitted on the full tang blade, with two torx screws on each side. The scales itself feature a fine diagonal machining for extra grip.

The contour itself is ergonomically shaped, giving the hand a comfortable grip. Finger grooves for the index finger and thumb feature jimping for better grip. This in combination with the overall shape also give the user a reliable orientation of how he is holding the knife.

Since the knife is a full tang design, the angled end of the blade tang is visible at the pommel. This was done by purpose, as it forms a decent skull crusher, but was also designed this way to give soldiers the feeling of a stable and reliable knife that won’t fail them.

The Sheath of the Spartan Harsey Dagger

While users have the option for either a kydex or Cordura sheath, I tend to go with the latter out of personal preference. Since I wrote about that sheath already several times on this blog, I will just link to the initial deep dive on this Cordura sheath and its many options to carry knives either on your person or load out. What I want to point out here is, that these sheaths are made by First Spear specifically for Spartan Blades.

Looking at the level of manufacture, it will come to no surprise that I will only find words or praise for Spartan Blades. As already mentioned, making a dagger symmetrically sound is a challenge on its own. Doing this with a hollow grind only ups the level of difficulty.

The blade itself is almost flawless – and I use the word almost, since I am critical enough to know that there is nothing perfect in this world. The fit and the tolerances of the Canvas Micarta handles to the full tang blade is incredible and one can see and feel the high standard the team of Spartan Blades is trying to live up to.

The PVD Coating provides excellent protection and can be even found on the hex screws in the handle, which is a very nice detail as it shows that Spartan Blades is not cutting any corners.

The same can be said about the Cordura sheath made by First Spear. Combining these two things make for a high quality package one can rely on.

The Spartan Harsey Dagger in hand

At first glance, the Spartan Harsey Dagger looks surprisingly small, as it appears bigger in pictures. Then again, this is only a first reaction because of the slim design. In fact, the length is actually not shorter than most combat knives and anything bigger would not make much sense on a combat loadout.

The balance of the dagger is phenomenal and the center of it is in the finger groove for the index finger. As a result the knife is fast in hand and very maneuverable. The jimping in the finger grooves provide excellent hold for a fencing grip. Furthermore, while the grip is 3D contoured it is not round, but oval – as a result the knife won’t roll in hand and the user can expect a firm hold with a hammer grip.

When holding the knife in a reverse grip, the pommel offers plenty of space to rest your thumb. At the same time it provides a wide contact area for the palm of the secondary hand, in case one needs to exert extra pressure – you might know what I mean.

In interviews, Curtis Iovito pointed out that the experience from soldiers in knife fights raised the issue of pulling daggers out of stabbed subjects or objects. With this in mind, the handle was carefully designed and the pommel accentuated the way it is.

While the initial idea was to pay hommage to two iconic dagger designs of the 20th century, the Spartan Harsey Dagger is not only a design of its own, but also timeless. The fit and feel, the overall look and the implementation by Spartan Blades resulted in a Dagger you could place in any period of human history.

I have no idea why, but for months I always had to remember the chilling ending in the movie “The King” (2019), when the main character “deals” with a scheming subordinate. What I want to say is that the design by William Harsey is the archetype of a dagger, triggering something deep inside the human memory of warfare. Does this sound esoteric and strange? Maybe. You have to hold the knife in hand and you will know what I mean.

Combining a purpose driven design of William Harsey with the excellent quality of Spartan Blades, resulted in a knife that will not only have its deadly impact in the conflicts of our time, but which will also bring joy to the collector of high quality blades.

The beauty of this blade actually makes me wanna get the black version as well, as it is even more beautiful than the tan version.

With that being said, I will come to an end. Many thanks to Spartan Blades and Curtis, for giving me the opportunity to write about this knife!

Thank you for reading!