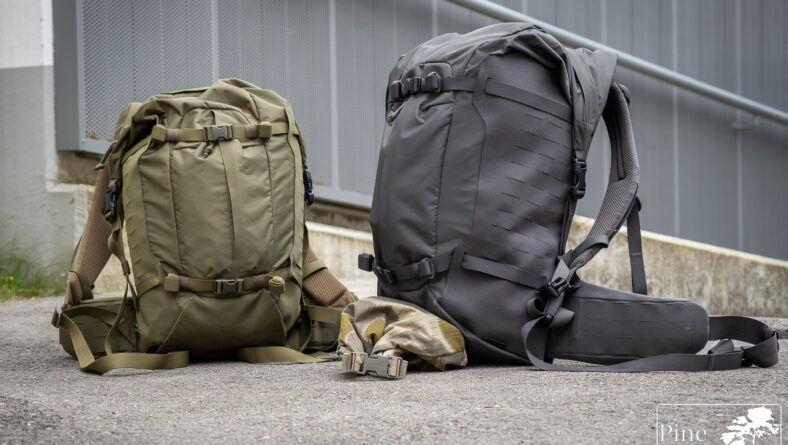 The TT Sentinel backpacks made their first appearance during IWA ‘22 and are finally hitting the market. As I already had the chance to take a closer look at both the TT Sentinel 28 as well as the TT Sentinel 40, I want to share my insights on both packs with you in order to give you a better idea of what to expect.

To be honest, I was surprised to find such a concept in Tasmanian Tiger’s portfolio, but in a good way. These lightweight packs will find plenty of users, because sometimes you do not need a load of pockets, pouches and 360° access. Sometimes one just needs to be able to put something into a pack fast and without any hassle.

So let’s do the overview and specs for those in a hurry, before going into more detail.

The inside features laser-cut velcro MOLLE. Both waist belts are detachable – while the Sentinel 28 only features wing type waist belt, the Sentinel 40 is fitted with a sturdy belt, equipped with laser-cut MOLLE.

The overall build up of the Sentinel packs is basically the same, with the exception of the different waist belts as well as the carrying system.

Looking at the main compartments: They feature a laser cut velcro area with MOLLE slits in the back of the inside. This amounts to  4 channels of 12 rows – interrupted in the center and middle of the velcro (because of the velcro tape) in the Sentinel 28 and 4 channels and 14 rows in the Sentinel 40. Using this you can either add velcro based accessories or MOLLE type pouches.

You can find both a velcro tab and a cord loop at the topside of the main compartment in either pack as well as a port to bring a hydration tube to the outside.

Looking at the main identification feature of the packs – the roll top closure. Tasmanian Tiger provides several options in that regard which are rather solved cleverly. First of all: both the TT Sentinel 28 and 40 have a one way zipper to close the main compartment. Additionally, the pack comes with two straps that are mounted at the bottom and which allow pulling the top corners tight on the left and right.

If you do not want to close the pack this way, you can easily remove those straps and use the buckles on both ends of the top to roll and close the opening like a roll top backpack. The above mentioned straps can then be either detached from the MOLLE or connected to each other on the bottom. There you will also find the Hypalon flaps to attach ice axes etc.

These Cordura sides also provide laser cuts for the two compression straps which encompass the packs. They come from the sides, go through the slits and can be closed by buckles in the center of the front. Velcro tabs ensure that the straps are secured and not flying around. What makes these compression straps interesting is the fact that these are fully detachable, if needed!

Another thing worth mentioning is the zippered pocket on the frontside of the pack. The zipper runs vertically, as does the pocket. In there you find enough volume for a bottle or an EDC pouch.

In order to save weight, the TT Sentinel 28 and TT Sentinel 40 are built with two different fabrics. 700den Cordura on the sides and the bottom (the areas which need reinforcement) and the lighter T-Square Rip FD material by Tasmanian Tiger, which is a laminate of a ripstop Nylon.

Both the TT Sentinel 28 as well as the TT Sentinel 40 feature the “Padded Back System (TT)” by Tasmanian Tiger. While the name is the same, there is a difference between both packs.

The basic layout of the backpadding is the same: both packs feature a finer mesh padding in a darker color on the sides (the areas which are in direct contact with the shoulderplates and kidneys) and a brighter mesh padding in the middle, using a larger mesh. As a result you will have a better air circulation in the back.

The difference is the attachment of the shoulder straps, or better said of the padding itself. While the TT Sentinel 28 has its padding sewn directly on the backside of the pack, the TT Sentinel 40 has a similar setup as the TT Modular 30 backpack – a padding element of its own, which is attached by a glide buckle and a velcro strap. This is not done to create an extra pocket (even though you can use it as such with some fiddling) but is actually a result of design needs.

Both packs feature contoured shoulder straps with a D-Ring as well as a laser cut MOLLE area, providing 5 slits to mount pouches, use cord for attaching additional items or to secure hydration tubes.

The waist belts are also differently implemented. The smaller TT Sentinel 28 only features the detachable “wings” as one might know them from the TT Modular 30 or the TT Modular Combat Pack. However, these do not feature pockets but laser cut MOLLE slits (3 rows and 3 channels each).

In contrast, the TT Sentinel 40 features a much larger and single waist belt, which also features laser cut MOLLE slits (4 channels, 3 rows). This one is also detachable, but the process is a bit trickier, as it is attached to a velcro area in the middle of the tunnel that runs behind the padding.

Since I have both packs for several months now, they have seen extensive use, either in the city or the outdoors. You can also see this on the pictures, as some wear is already visible.

Overall both the TT Sentinel 28 as well as the TT Sentinel 40 are very practical and comfortable packs. For me it was something new to have a roll top type pack in extensive use and the fact that you can “just throw” stuff into the pack has turned out to be quite useful sometimes.

Something that has to be said: Both packs are not intended to be dry packs. While the roll top secures the top zipper from water, the seams are not welded. You will find seam tape everywhere but don’t think these packs are waterproof. However, they are highly water resistant because of the DWR properties of the fabric.

A downside of both packs is the form itself – while it looks rather cool, the shape has the disadvantage that both packs won’t stand by themselves if put on the ground. They also have the tendency to pull the user to the back, when fully and more heavily packed. This is a result of the center of gravity being too far back. If you are aware of this, you can prevent this by smart packing. However, if you have one bigger object in the pack, this becomes an issue.

Looking in more detail at the TT Sentinel 28: The pack is really ideal for urban EDC. It not only looks amazing, but is also the right size for everyday errands. Having the roll top option makes the pack expandable or able to downsize when needed. But it also suffers from the same problem most smaller packs of Tasmanian Tiger do: If you are a bigger/taller person, then the shoulder straps are too short and the waist belt becomes obsolete.

With the size of the TT Sentinel 28, the waist belt has no real use – especially as there are no pockets on it – you can add MOLLE pouches, but I quickly decided to use the pack without the waist belt, as it is more comfortable to use.

The same can be said about the TT Sentinel 40. While the waist belt is much better, because of the size of the pack, I removed it after a short while using the pack. It does make sense when carrying heavier loads and in this sense the waist belt works as intended, by transferring the weight of the pack on the hips.

Because of its size and dimensions it is much better suited for taller persons. With 40l volume, the TT Sentinel 40 is a workhorse and offers all of its volume without the restrictions of pouches/pockets or other features.

Both packs replaced my last EDC pack and are in constant use. As already mentioned I run both of these without the waist belts. I also use them in a roll top fashion and removed the side straps, as I found them to be in my way sometimes.

Maybe I will try to experiment with the MOLLE sides and add pouches, but so far it was not necessary. However, the option to modify the pack after your needs, is a much welcomed option to have and typical for Tasmanian Tigers approach to modularity.

Tasmanian Tiger is well known for their excellent level of quality. In the last few years I never had a product of this company which showed any flaws in workmanship or materials. The same can be said about the TT Sentinel 28 and 40. Both packs came in excellent condition and held up nicely so far.

The mix of high quality materials and careful production really pays off. While the laser-cut Cordura provides the strength for the MOLLE platforms, the TT Square Rip FD provides a lightweight construction while maintaining decent wear resistance.

I will leave it at that because by now I just could copy paste the text from previous reviews here.

Tasmanian Tiger went a new direction with the Sentinel packs. While they might look like tacticool EDC packs at first, they also serve their role in a military sphere, especially when larger items need to be carried, or if one needs a pack for a quick exfil that doesn’t allow the luxury of putting everything in a dedicated pocket.

While the TT Sentinel 28 is ideal for smaller errands, hikes, transports etc. the TT Sentinel really shines when a larger volume is needed. The rolltop design makes it easy to expand the packs when needed, or compress them down to a smaller size.

As always Tasmanian Tiger provides the user with plenty of options to modify the packs to personal needs – be it laser cut velcro MOLLE/PALS on the inside, or MOLLE on the outside. In that sense, the company managed to pull another stunt – creating yet another pack that can serve both the civil as well as the military sphere.

With that being said, I want to thank Tasmanian Tiger for making this review possible.

Many thanks for reading!

As always feel free to leave a tip – helps alot!